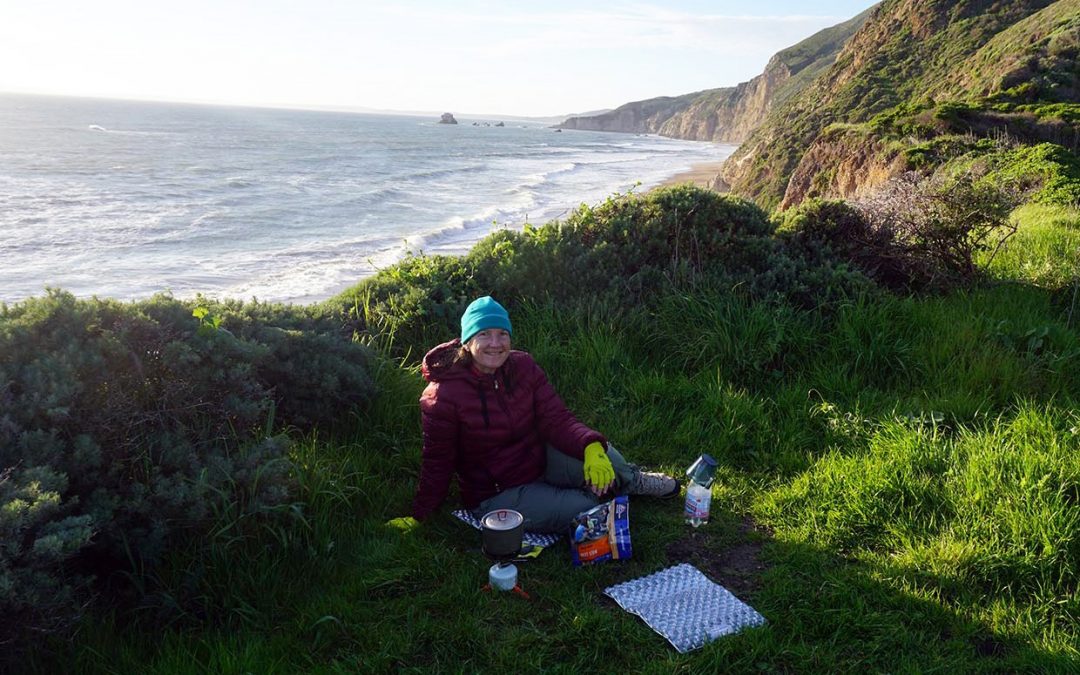 I just returned from my 2nd backpacking trip ever!  I am still filled with a sense of enthusiasm and energy.  What an experience it is to put everything you need to live for a few days on your back and head out into the wilderness.  As I went out the door, I could not help but think of so many similarities between backpacking and the pursuit of financial independence.

First, let me say that I had an interesting transition.  I just joined an online gathering called the Millionaire Roundtable and on my very first opportunity to participate in the one hour video conference, I was asked to tell my story in what they call the Spotlight.  I don’t share the details of our finances here, but I will at least say that between our home, two rental properties and lifelong savings, we have crossed the million dollar mark.  It just so happened that this first discussion was right before we needed to hit the road on our big backpacking adventure.

As a result of these two interests of mine “crossing paths”, I noticed so many parallels that I thought I would share.

Planning is One Thing, But it is All About Flexibility and Adapting

Backpackers have detailed maps, spreadsheets with packing lists, and have selected the date they want to go “out” on their own.  Just like all of us planning our escape to Financial Independence!

We in the FI world use a variety of retirement calculators to compare our savings rate, project our investment growth and chart our course.  Recently I found this Interactive Guide to Early Retirement Adam at Minafi which is an awesome, epic post.  I became familiar with his article when we competed in the Rockstar Rumble, a competition among financial bloggers.  I was outmatched by this excellent article and I wanted to vote for it instead of my own post about an Escape Room.

I studied his post because I started to write an article called “Why I’m Voting for My Competitor in the Rockstar Rumble, and You Should Too!”.  Except I canceled that post.

Why?  Not because his article isn’t excellent.  But, with all due respect to Adam, I found as I looked into retirement calculators, I started realizing that my deep-down opinion is that…..

I found myself saying that in the Millionaire Roundtable.  Did I really say that?  Yes I did.

You can make plans and map out your path, but the fact is that what you really need for both retirement planning and backpacking are the skills to be able to adapt to whatever comes your way.  Fritz at The Retirement Manifesto wrote a great article called Your Plan is Wrong, Plan Anyway that best explains this.

I felt like I had said something crazy.  But when we returned from our trip and took our phones out of airplane mode, the first article I read from people in the FI community was from Amy at Life Zemplified announcing that she decided to leave the cubicle 870 days early.  Wow, what a thrill to hear!  This quote struck me:

“We’ve now altered our plan, taking a scenic detour if you will, by changing up our date a bit. We don’t yet know when John’s retirement will begin, but mine will start tomorrow.”

I like that.  My own father said it even better when he decided it was time to retire.  He told his boss:

“Yesterday Was My Last Day”

That was similar to my own experience.  Yeah, I had spreadsheets.  I had been plotting our course to retirement and my plan was nearly complete.  With just one more year to go, work got really crazy and the long hours and exhausting commute became more than I could take.  The next thing I knew, I was quoting my father!  It was the best thing.  But scary.  It required me to be flexible and ready to make some other move if it didn’t work.

But it has worked out fine.  Partly because I bought myself a job shortly afterwards 😉

And partly because the stock market has been on a steady climb ever since.  That was 2010.  What does that have to do with backpacking? 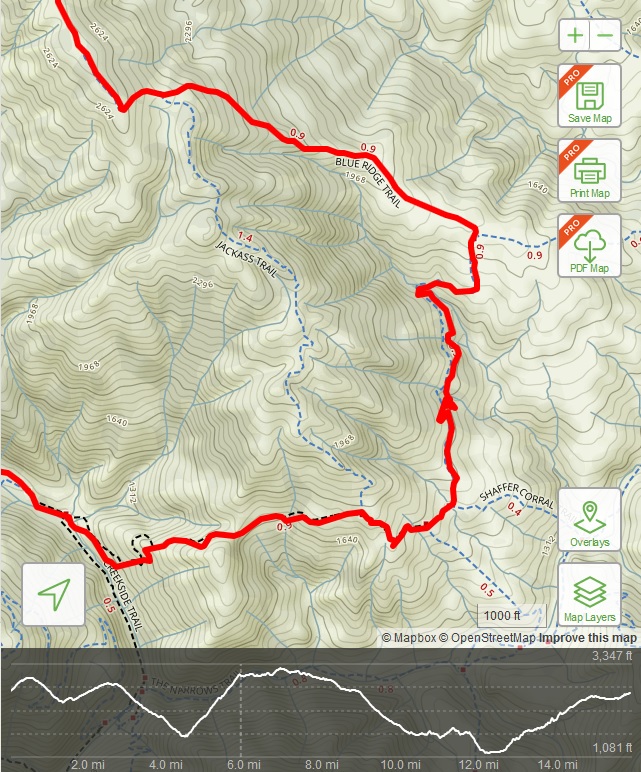 There Might Be a Downhill Just Around the Corner

We went to Henry Coe park not too far from our home in Northern California.  We were humbled to be invited to join a “Gathering of Gear Geeks” (GGG), a group of about 50 experienced members of the Backpacking Light forums.  It was like FinCon might be to us in the FI Community.

We met some really great people.  One person commented on the major elevation changes right there at Henry Coe park.  The guy said:

“People hike the Sierras to Prepare for Henry Coe”

It was sort of a joke.  It is hard to imagine something with more ups and downs than what hikers are faced with when tackling the John Muir Trail.

That is a lot of steep climbing as well as many serious downhills to contend with.  And even though it ends on Mount Whitney, the tallest point in the Continental USA, it is similar to the stock market.  You don’t get to reach that height in one straight line.

I think a lot of people who are new to investing, with less than a decade of experience, may not have honed the skills for going downhill.  Even for a hiker, downhill can be the toughest part.

My own interest in investing started in 1999, just before the dot com bubble burst.  I had 401K money accumulating many years before that, but that was the year I started my business and took charge of my own portfolio.  And it was a wild ride.  I have followed my balances up and down, seeing that major correction and then the big crash of 2008.  In both cases, I not only dared to do some market timing (don’t do it, even though I got lucky!).  Mostly I just continued pouring every extra dollar we had into the greatest opportunity of a lifetime.

I have that contrarian bent and the stomach for fearless endeavors.  Both backpacking and stock market investing can challenge you to go out of your comfort zone.  In both cases, the rewards are spectacular!

There are several other connections I noticed between backpacking and the early retirement journey:

And then there is investing.  Yeah investing…

Spending Money on Backpacking Equipment is Similar to Investing

Okay, it seems a little crazy to spend a bunch of money on expensive items so that we can go out and be minimalists, right?  Ironic, huh?  But stick with me on this.

Yeah, we paid a lot for down sleeping bags and jackets.  But we could lower our thermostat and wear those around the house.  Heck, I could even turn out some lights and use my headlamp if I wanted to.  A friend of ours doesn’t leave home without his sit pad, fire starter and water purification system.  Pretty funny.  You really can use these things in a lot of different ways.

Actually the down clothing can be important.  I have a friend who likes to say “There is no such thing as bad weather, just bad clothing”.  I like that.

But these items aren’t really investments unless you get out there and use them.  Otherwise, similar to gym memberships, they might just be good intentions.  You have to follow through.

I want to share a video from a couple who have found a way to make backpacking the focus of their life.  They aren’t wealthy, but they live a “rich” life.  It is the true combination of backpacking and financial independence, done in their own style.

Our first backpacking trip was at the Wildcat camp in Point Reyes last March.  That first picture is of us on a cliff overlooking the ocean, cooking our dinner on the miniature stove in one of the most sought-after spots in California.  That campsite is very popular on Reserve America and we were fortunate to book that site for my first packing adventure. 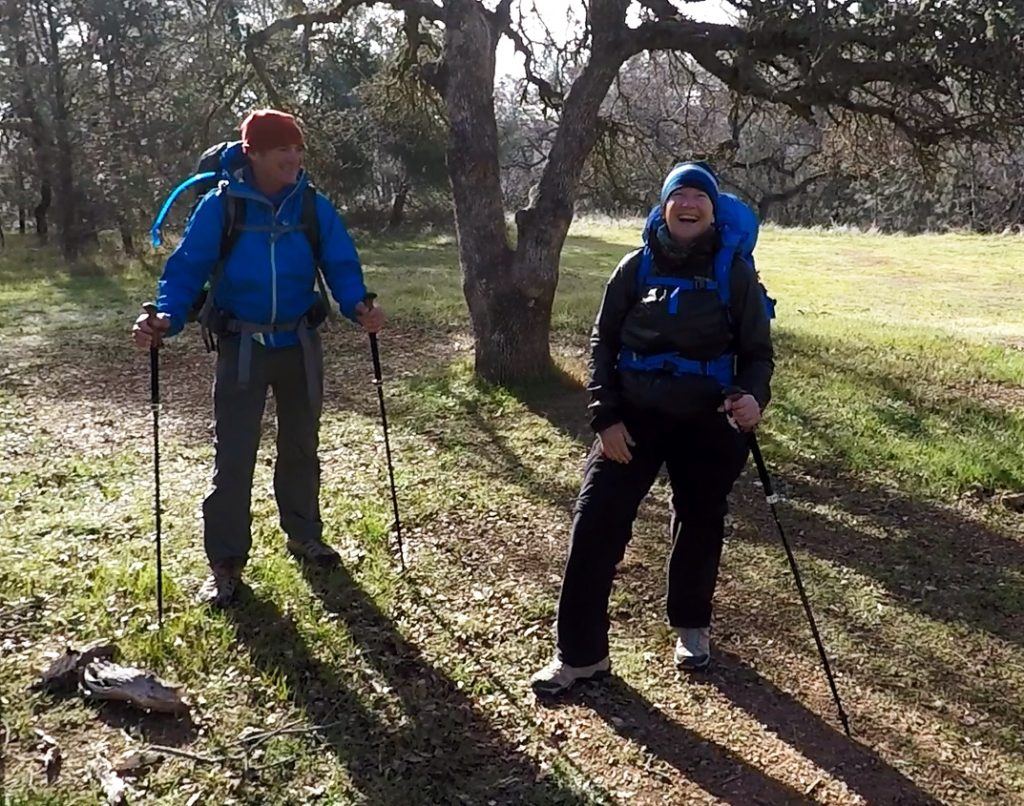 This second trip to Henry Coe was a blast.  I filmed some video using my GoPro Hero5 and I will be editing it to share with the GGG folks.  We met some wonderful people there and I want to give back to them in my small way.  I promised to update this post with a link to the video when it is complete, and now it is.  It’s 18 minutes long, so if you enjoy backpacking, check it out here.

What Say You?  Have you gone backpacking?  Have you found any similarities to finance?